Above: New Zealand Infantry advance to the front with Tank support in 1917. 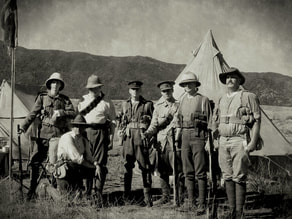 We are a group of world war one reenactors that take part in "Living History" and "Tactical Battles", educating both the public and ourselves on what it was like being New Zealand Infantry almost 100 years ago. We partake in trench battles and public displays. All of us have pride in reenacting the Kiwi of the Great War: sitting in the trenches of the western front, crawling our way through the mud of no-man's-land, or teaching the public. This website will put you in touch with members that can help you make an excellent World War One impression. Anyone can become a member of our unit. We accept people of all races and creeds. One need only purchase or borrow a basic impression and rifle to participate.
Why Kiwi?
The New Zealand aspect of the war is very easy to overlook in the big picture of World War One. Being part of the British Empire, colonial troops like New Zealanders were suppose to be small time filler troops. Being part of the famed ANZACs, the Australian's aspect can eclipse that of the New Zealand perspective. But anyone that studies history knows that the smallest help can turn the tide of history. New Zealand was a country of just over a million people when war broke out. From 1914 till 1919, around 120,000 men would enlist to serve and defend the empire, 1 in 10 would never come home. New Zealand troops would making lasting effects in the Pacific, Middle East, and in Europe that are felt to this very day. We will never forget the sacrifice those men made one hundred years ago.


For God, King, and Empire!